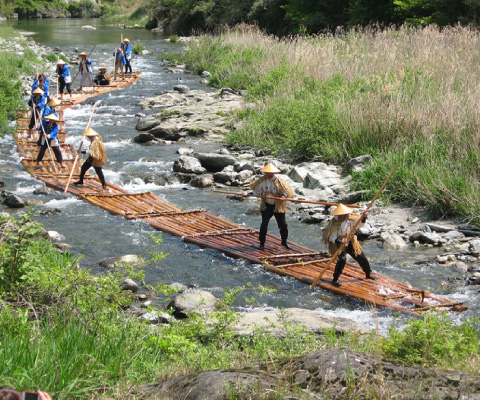 By the enthusiasm of the local people, rafts are again floating down the Oda River!

From the late Edo period until the 1945's, you could often see timber brought down from the mountains on the Oda River by "rafting". The wood was carried with so called "Komata" rafts, made from joining 10 roundwood logs of 4m length, to Nagahama at the mouth of the river. However, after building a forest road from the mountains in 1948, the timber got transported by trucks, and rafts were no longer used.
It took 45 years until local residents, trying to revive former scenes with floating rafts, started to organize a yearly "rafting" event. Now many people come to watch the rafters in their traditional raincoats and straw hats standing on the long line of 10 or more connected rafts, going downstream by skillfully handling the rapid flow. At the occasion, local women are treating visitors to the specialty "Tarai Udon" served in a broth made from soybeans and shiitake mushroom.